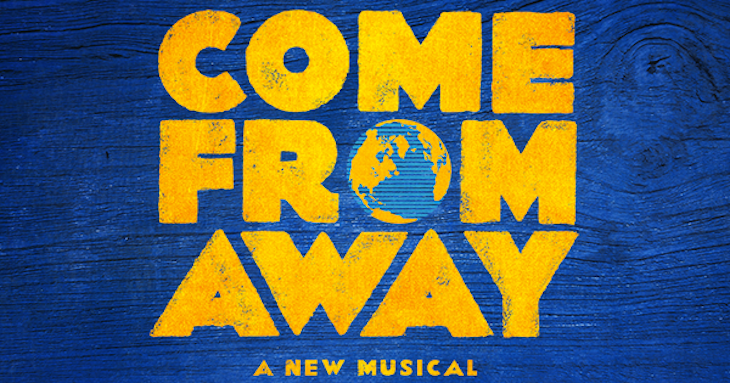 It’s not often that a new show comes along which forces you to re-think everything you thought a musical was and IS supposed to be. On Saturday February 18, “Come from Away” the new musical by Irene Sankoff and David Hein began previews at the Gerald Schoenfeld Theatre. This Canadian borne gem is re-defining everything we know about the genre. A cast of 12 playing over 28 different characters comprise this almost completely ensemble sung folk musical (the music style being another surprising break from what you’d expect to be traditional musical theatre fare). The set, designed by Tony Award winner Beowulf Boritt, proves without a doubt that story is key; modestly consisting of a center stage turn table, a rustic back wall with functioning entrances/exits, and a series of barren tree trunks that extend far into the grid flanking each side of the stage providing subtle masking for the on stage band. What proves to be most memorable is the delicate handling of the American tragedy, the 911 NYC World Trade Center attack. “Come from Away” is the gentle reminder that what we need most right now is humanity and love. Don’t miss one of the most memorable evenings on Broadway while you still have the chance.